To relief of high congestion of traffic, plan growth of the Guwahati Metropolitan Area and expansion of the city to the North Bank and facilitate easy movement of the traffic, the Government of Assam has embarked on a very ambitious plan on the construction of the transport infrastructure of the city. To this effect , the Hon’ble Finance Minister of Assam in his Budget Speech 2017-2018 announced the construction of two bridges across river Brahmaputra, one at Panbazar connecting to North Guwahati and the other at Palashbari connecting to Sualkuchi for which INR 100 crore was released from the State budget in 2017-18. Another sum of INR 150 crore is provided in the budget 2018-19 for construction of the Panbazar Guwahati-North Guwahati Bridge.

GMDA have engaged Consultant SMEC India Pvt. Ltd member of the Subrana Jurong Group, a subsidiary of Govt. of Singapore for preparation of Feasibility study and Detailed Project Report (DPR) report for Two Bridges across river Brahmaputra through a competitive international bidding process. The Feasibility report for Panbazar-North Guwahati across river Brahmaputra was completed in December 2017. The alignment from the Bharalumukh point at Guwahati to North Guwahati landing at MajGaon was approved by the Govt. Accordingly on the approved alignment the DPR is completed in May, 2018. The project cost is estimated at INR 1925 crores with project construction period of four years.

As per the decision of the State Govt. GMDA has now handed over the bridge projects to the department of Assam PWD for implementation and execution of the project in Sept., 2018.

Salient features of the Bridge: 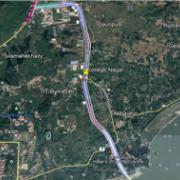 Bridge: The total length of bridge on the river is 1600 m measured from South to North Bank. Out of this 1240 m will be designed as a multispan Extradosed bridge with individual span length of 200m between consecutive Pylons. The extradosed bridge is considered because of superior technology which reduces high numbers of foundations in the river over the conventional bridge deign, good aesthetic view and less construction time.

Landing: At South Bank forms Y- junction with two rotaries at Bharalumukh. The arms are designed with rotary end 30 m dia & connected by a new 3-lane road along the river bank designed as 3-lane one way box Girder Bridge. Junction 1 meets AT Road near the Bhuthnath Temple. Junction 2 meets the meets the MG Road at Sankardev Udyan Park on the bank of the river nearby Pragjyotish Cultural 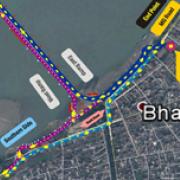 The bridge lands at North Bank at a distance of 460 m west of Aswaklanta temple at MajGaon. The length of viaduct is 1150 m from, MajGaon landing to Abhaypur village. From the viaduct end at Abhaypur village-1 the road meets the Abhaypur village -2 at college junction and goes towards North along the Abhaypur main road and meets NH-31 at Gauripur junction. Total length of road is 4.2 km