Guwahati has been suffering from urban floods caused by water logging after heavy rainfall in its catchment area. The situations aggravates with the inflow of Meghalaya storm water that passes through the drainage system of Guwahati city and ultimately percolate to Brahmaputra either by gravity flow or mechanically with the help of pumping system. Although steps are being taken to mitigate the effects of and ultimately thwart the occurrence of such floods; what is urgently required is a comprehensive response mechanism which takes into account all emergency processes under one umbrella, and all stake-holders under one control. In this regard, it may be cited that the experience the world over is that a prompt, well-coordinated andeffective response to any disaster not only minimizesloss of life and property but also facilitates early recovery.

National Disaster Management Agency has developed and adopted the Incident Response System (IRS) for disaster management – a novel methodology based on the Incident Command System (ICS) of the United States.

GMDA Action against Mitigation of Floods in Guwahati 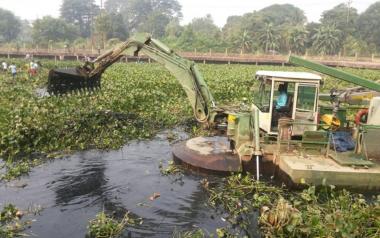